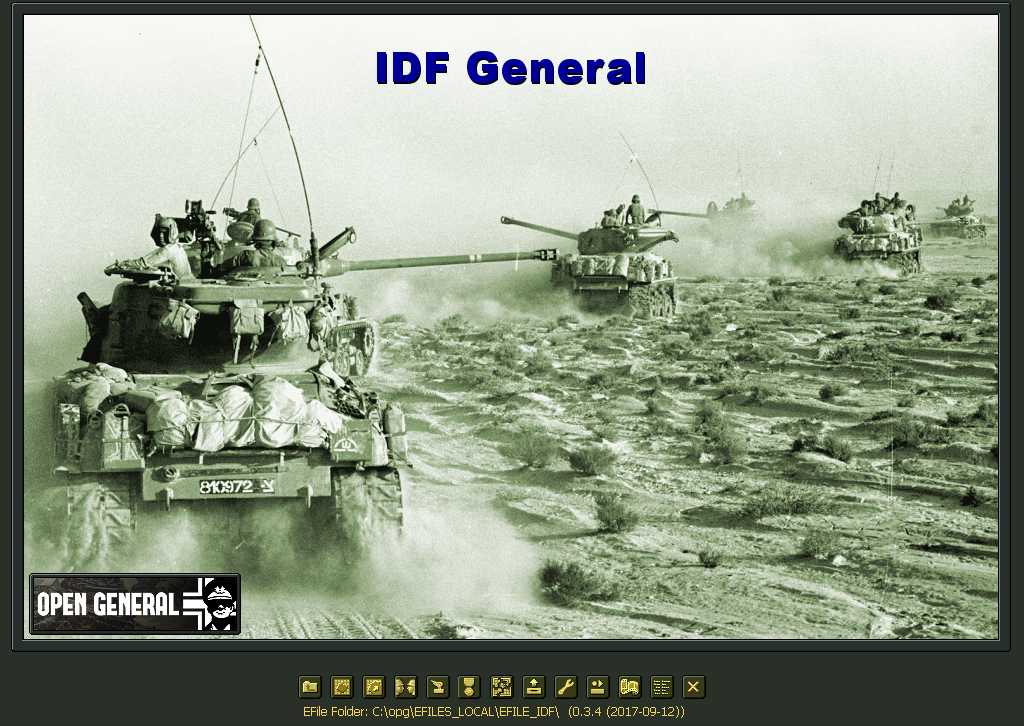 this project started in 2010 and it hasn't reached the status to be released, otoh i made some interesting test scenarios with alternate tileset, missile class, etc. and it may be interesting for other people too

what is this efile about? it's a one-campaign efile again: covering first five arab-israeli wars (1948-82) from idf perspective. maybe once i will create arab campaign(s) too. it contains only egypt, syria, jordan, arab league (for supporting arab countries like lebanon, iraq, yemen, algeria, tunisia) and israel. it's not a complete "cold war" efile, and i'm not interested in creating a generic cold war efile at all. i simply have no time and knowledge to maintain hundred nations with thousands of equipments. but i need an efile supporting bleeding edge opengen features like tiled maps, containers, jet attribute, rtp/htp, and many others. i also heavily modified the movement table (i use x1-x3 multipliers), weather zones, classes, terrain types, etc. no existing (released or not) efiles would have been a good choice for my project. you can blame me if you wish, of course

otoh this efile is based on the ancient pg2 idf mod, its peg descendant, Santi's and Juankar's olgcw

this efile is so "bleeding edge" that you should get the latest semi-released opengen test version to play. today it's 0.90.52.18

the idf general campaign is basicaly finished (i want to add one 1948 scenario against syria), smaller part is made by me, the larger part is converted & openized from the aforementioned efiles. however, i should tweek the scenarios a lot (remember, some classes aren't revised yet), so i've uploaded only three test scenarios for now. they helped for me and Luis to find & fix dozens of glitches, and they may give you a first draft, what this efile is about at all

gui is mostly made by Juankar, his contribution cannot be overestimated

the plan is adding this efile and the campaign to the repo in this year. until then, you can download the beta versions from my site:

what efile is it?

it's an anti-adlerkorps efile. it's not a historically accurate equipment cyclopaedia. though efile entries refer to more or less real units, equipments, vehicles, weapons, etc. their stats aren't based on strict calculation of kg, mm, km/h, etc. they may be available +/- a few years, and there are as minimal number of units in the same types as possible. playability is the first, second and third, everything else is less important (just like in efile_son). maybe it'd be easier to rename units to "medium tank 1967" and "heavy wheeled gtp 1973", but i didn't. well, i set these generic names as alternate names, otoh original names create a special feeling, at least for me, so i kept them

ok, a few more words about the efile:

- all inf and ships (small gunboats, patrol boats and missile boats) give support fire, and probably towed at will do too
- of course attachments ARE available. if you open one of the test scenarios, you see them on requisition panel. actually i forgot to exclude the missile class :doh
- there are very generic factions depending on movement methods:

so i can't deny the influence of lxf

»my real name is csaba (tʃɒbɒ)«